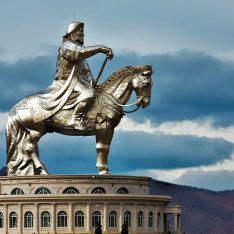 Naadam is the most widely watched festival among Mongols, and is believed to have existed for centuries in one fashion or another. It has its origin in the activities, such as military parades and sporting competitions such as archery, horse riding and wrestling, that followed the celebration of various occasions, including weddings or spiritual gatherings. It later served as a way to train soldiers for battle, and was also connected to Mongols’ nomadic lifestyle. Mongolians practice their unwritten holiday rules that include a long song to start the holiday, then a Biyelgee dance. Traditional cuisine, or Khuushuur, is served around the Sports Stadium along with a special drink made of horse milk (airag). The three games of wrestling, horse racing, and archery are recorded in the 13th-century book The Secret History of the Mongols. During the Qing dynasty’s rule, Naadam became a festival officially held by sums. Now it formally commemorates the 1921 Revolution, when Mongolia declared independence from China. Naadam also celebrates the achievements of the new state.[ It was celebrated as a Buddhist/shaman holiday until secularization in the 1930s under the Communist influence of the Soviet Union.

The biggest festival (National Naadam) is held in the Mongolian capital, Ulaanbaatar, during the National Holiday from July 11 to 13, in the National Sports Stadium. It begins with an elaborate introduction ceremony featuring dancers, athletes, horse riders, and musicians. After the ceremony, the competitions begin. The competitions are mainly horseback riding.