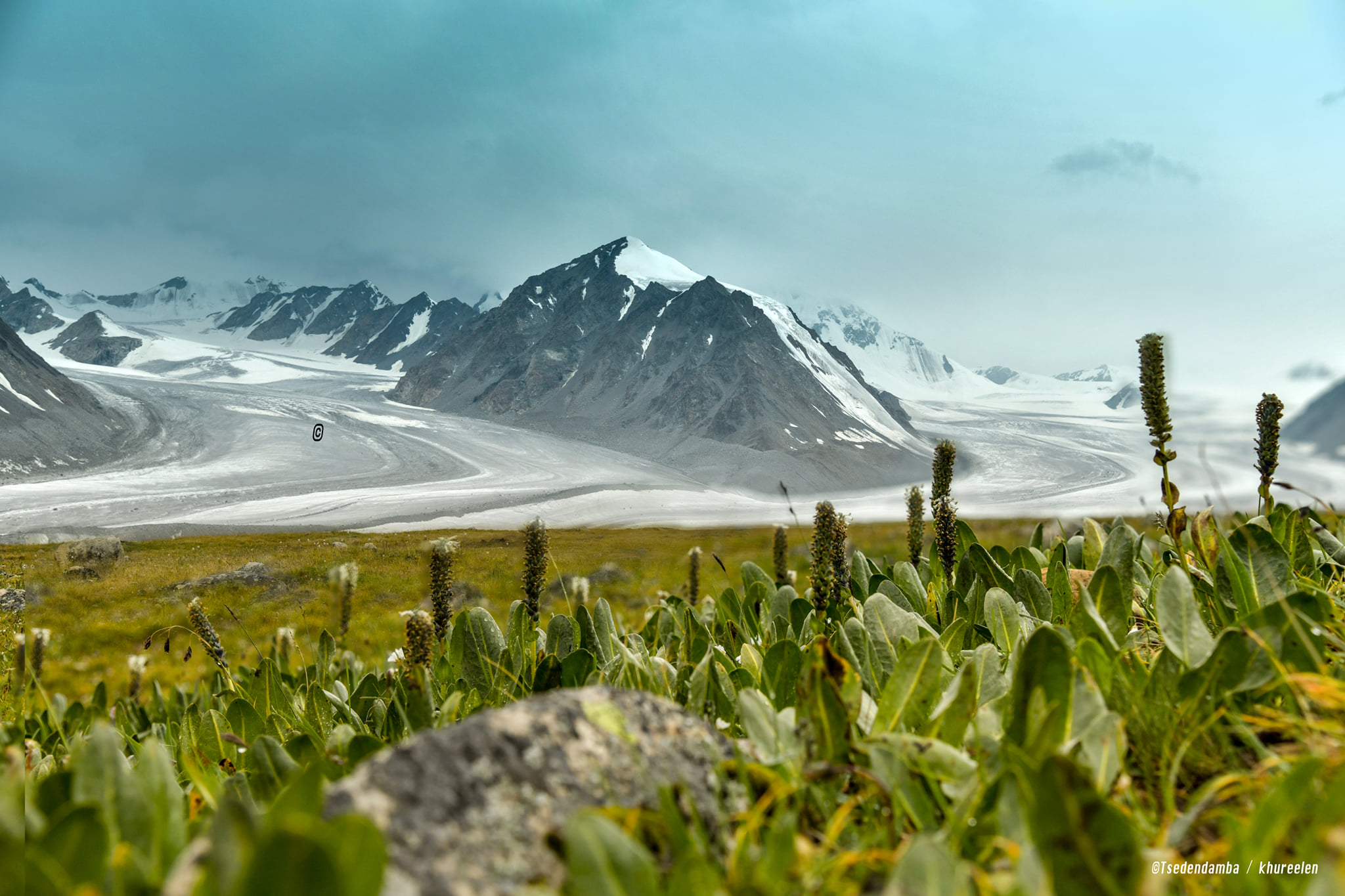 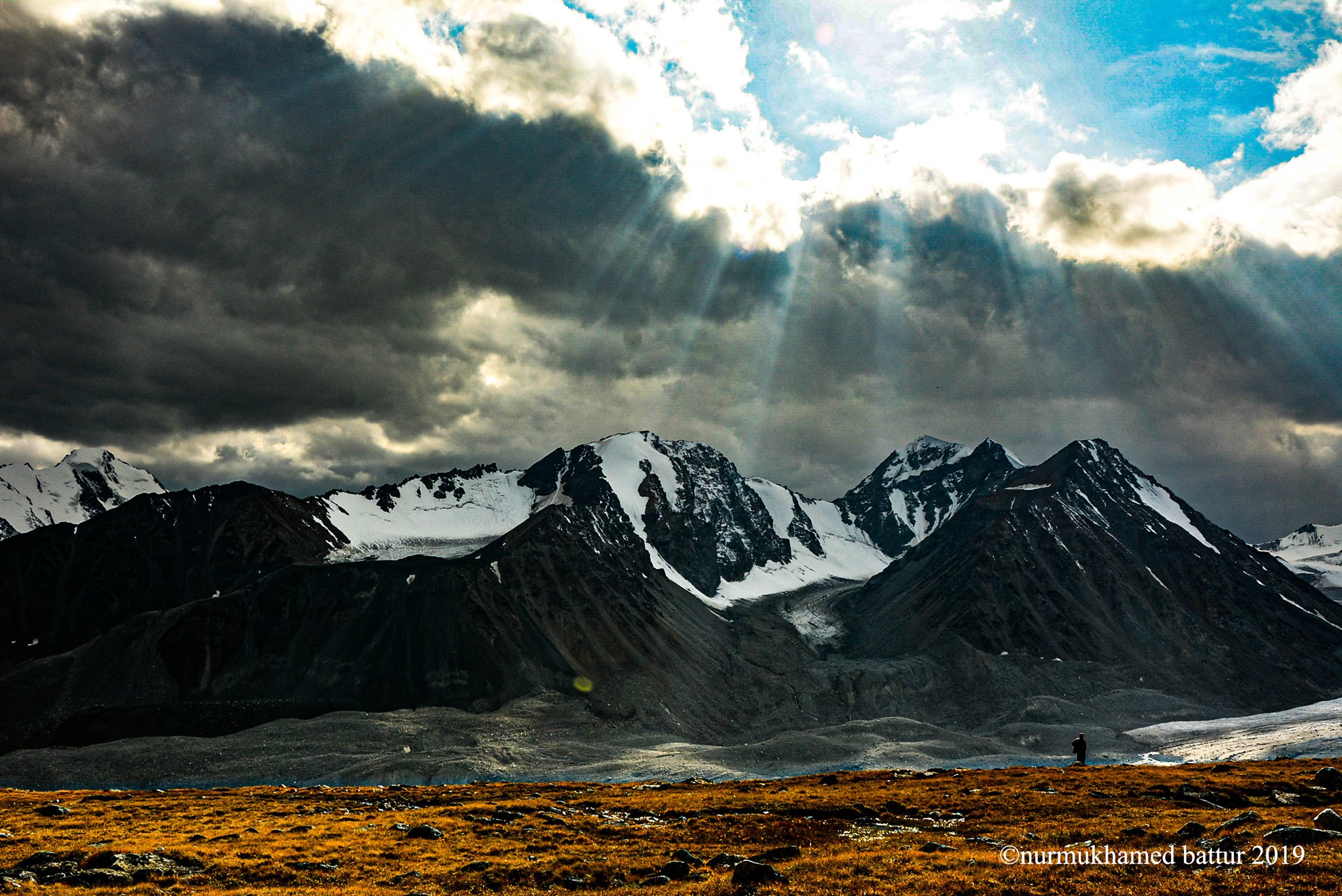 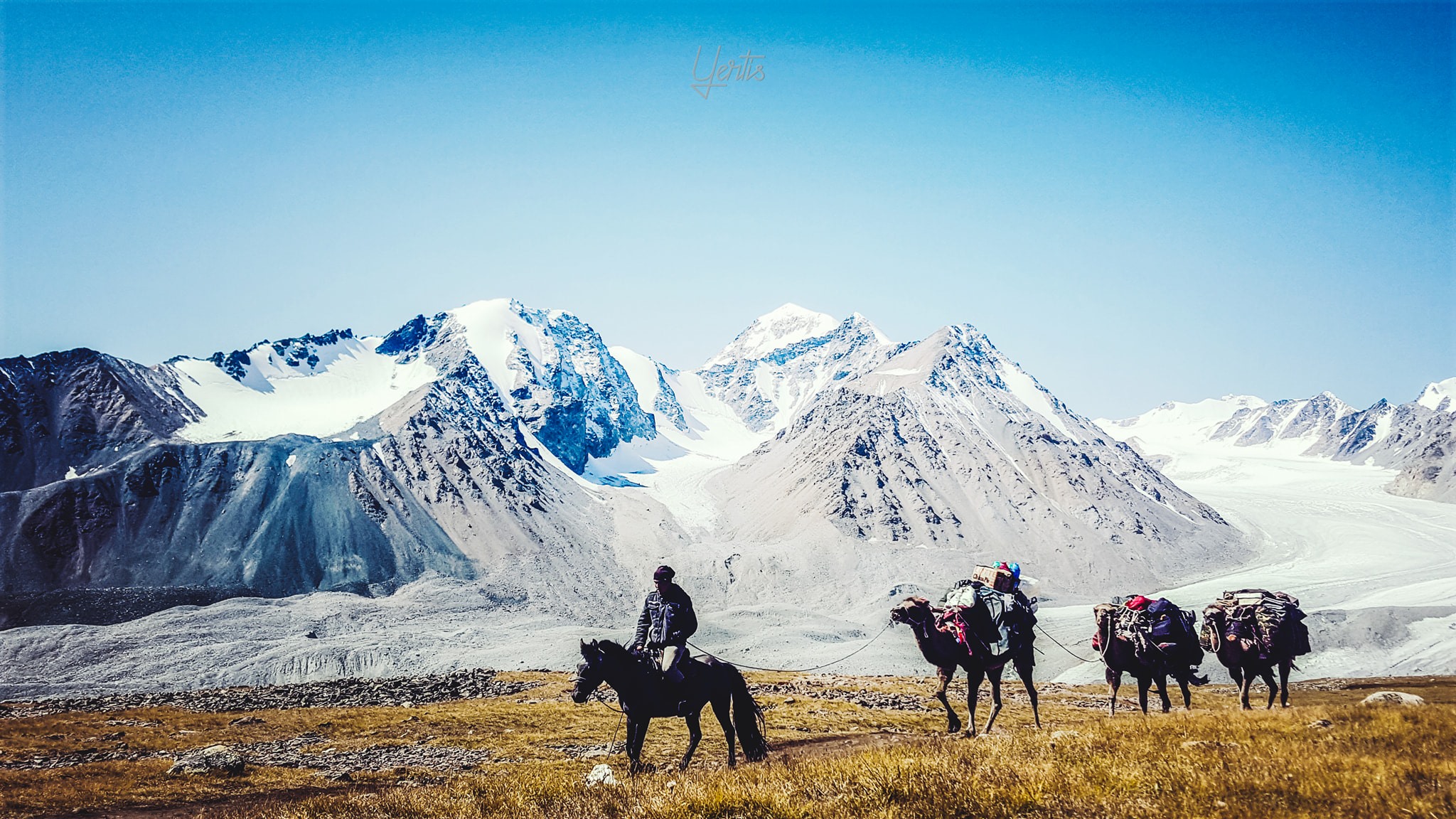 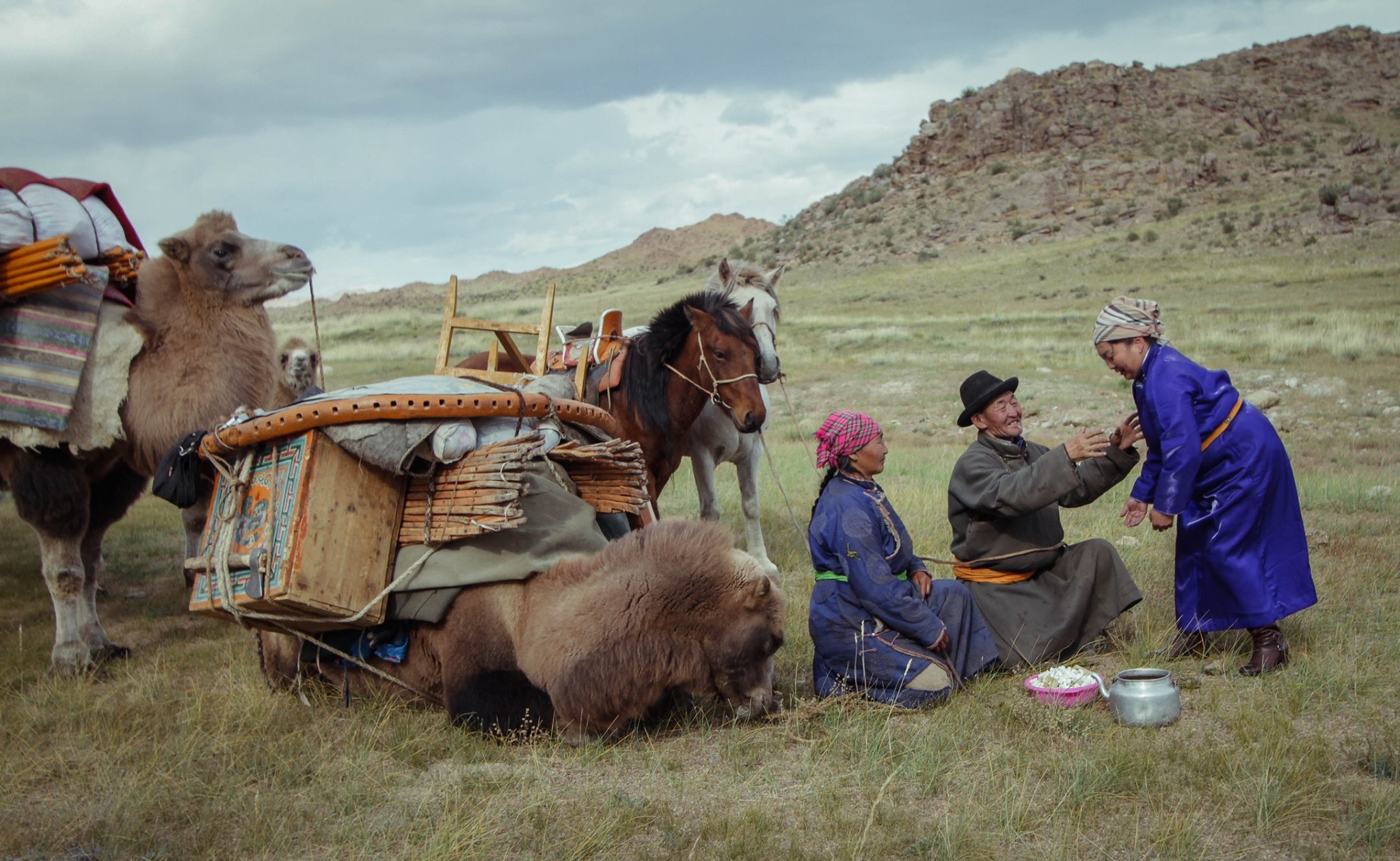 The Altai Mountains are a beautiful mixture of rough mountain peaks and sweeping valleys; for people who seek adventure, it is both a challenging and romantic landscape. Here in the mountains, Tuvan, Mongolian, and Kazakh nomads live together with livestock and wild animals alike. Ibex, snow leopards, rock ptarmigans, Altai snow-cocks, and Argali sheep, some of which are endangered, all call these mountains home. Great numbers of archeological remains, such as petro glyphs, and Turkish monuments, and deer stones all reveal a story of how spiritual this place is. Go farther into this wild landscape each day as you drift into the new adventures and experiences of nomadic life.

Fly in to Ulaanbaatar, Mongolia’s capital city.  At the airport, you’ll be met by your guide and taken to the hotel.  After a rest, your guide will take you on a city tour.  Ulaanbaatar is the heart of Mongolia, boasting more than half the country’s population.  This city is famed for it’s sightseeing spots such as the National Historical Museum, the Choijin Lam Temple, and the Zaisan Monument, with an outstanding view overlooking the metropolis. Dinner is Asian meals /Korean, Japanese, Mongolian, Chinese/. Overnight is at the hotel.

Bayan-Olgiy means “fertile cradle”.  This great valley where nomadic people spend their summers is situated at the base of Tsengel-Hairkhan Mountain (3800m).  This aimag (province) is a stunning spot for photography, hiking, cycling, and horse riding.  In addition, it is here that you will see the authentic lifestyle of the Kazakh people.

After breakfast, you’ll gather your things and go to the UB airport for the three-hour flight west to Olgiy.  Your tour crew, a guide, a cook, and a driver, will meet you at the Olgiy airport.  Today we’ll push about three hours to the Haraganti valley, where our friend, an eagle hunter, spends his summers with family and friends.  Our hunter will show us his gorgeous bird.  The summer is not eagle-hunting time, however, you’ll be invited into the hunter’s home and treated to a traditional Kazakh dastarhan, or spread of food, and milk tea.

Overnight in a ger camp.

Day-3 Drive to Turgen Uul, Hike to a waterfall

The Turgen Uul is the initial stage of the snowcapped chain of mountains in the Altai Range.  This particular mountain is famed for its waterfall, which begins its trickle at the mountain peaks.  Here, historical remains have been found from both the Bronze and the Iron ages.  As archaeologists search deeper, they discover new things in the history of mankind.

Today, we’ll drive toward the southwest.  Through the windows of our car you’ll see the great Altai Mountain Range spread out.  Driving on the banks of Black and Khurgan Lakes, crossing rivers, passing ancient archaeological sites, surrounded by mountains, stunning lake views, and lurch tree forests, this is the area where you’ll spend two nights.  We’ll have lunch by the shore of the lakes and on the tops of mountains when we hike.

Overnight in a tent

Shiveet Khairkhan Mountain is one of the sacred mountains of the Altai Mountain range.  For thousands of years, this mountain has been a home for men and for wild animals.  Shiveet Khairkhan Mountian is rich with archaeological remains from the Bronze and Iron ages.  It is estimated that 400 ibex live here.  The tremendous valley called Tsagaan Gol (White River) Valley is connected to Shiveet Khairkhan Mountain from the west.  The local Tuvan nomadic people have their winter shelters by the foot of the mountain, but during the summers, they move up where the Tsagaan Gol begins as melt water from the glaciers.  Tuvans are a Mongolian ethnic group and have lived in this area for centuries.  They practice shamanism and this is the only place where you will see these nomadic Tuvan people living close to each other.  The population of Tuvans in Bayan-Ulgii is about 3000.

Today we’ll drive to Tsagaan Gol Valley, which will take about five hours.  On the way, we’ll drive through Snake Valley, where some Kazakh nomads move just before the animal-breeding season during the spring.  We’ll stop to see ancient burial sites, standing statues, and a local nomadic cemetery, the source of some local legends.  You’ll have the opportunity to take as many photos as you’d like along the way.

In Tsagaan Gol Valley, we’ll camp by the river and meet our camel guy, who will be responsible for transporting our supplies for the next days.  Close to evening, you’ll enjoy the sunset and observe some Tuvan herding and milking processes.

Day-5 To the Base Camp (riding or trekking)

The base camp offers of view of the Tavan Bogd glacier.  Tavan Bogd means “Holy Five”, named after the five high, snow-caped peaks of the mountain: Olgiy, Naran, Malchin, Nairamdal, and Huiten.  Some of these peaks are divided between nations: Russia, China, and Mongolia.  The Nairamdal or “Friendship” peak is divided between all three and is the second highest.  The highest peak of Tavan Bogd is Huiten, “Cold”, at 4374 meters.  Of the Altai peaks, the Malchin peak is the only one where climbing equipment is not required.  The ridge of this peak is where the Mongolian and Russian border was drawn.

This will be a special day.  After breakfast we will prepare ourselves for the day’s journey.  We’ll leave our driver and car behind for the next two days and load the camels with necessary supplies.  We’ll set out west toward our destination.  The next camp is a 16km, 5 hour trek, where we’ll overnight in tents.

Day 6- Back to Tsagaan Gol Valley, visit to a Tuvan nomad family

As the sun rises on our camp, the morning dew will glisten.  After breakfast, it will be time to return to the river valley.  We’ll head back to our driver and the cars but take a different route than on Day 5, following the White River valley through a local nomad family’s summer spot.  The rest of the staff will keep the main trail back to the cars and will be waiting for us at the campsite.  We’ll overnight in tents.

There will be a full day of driving via Tsengel and Ulaanhus soums.  Along the way, you’ll enjoy the frequently changing views of the mountain colors.  Upon return, we’ll check in at the Tsambagarav Hotel in Olgiy.  With the rest of your day, it will be possible to walk into town to visit the local museum or wool and felt craft shops.  Some of the most beautiful pieces of Kazakh handicraft are the wall hangings made by Kazakh women for the walls of gers. Overnight at the hotel.

In the morning hours, we’ll take a city tour of Olgiy.  After lunch at a local restaurant, we will set out toward Tsambagarav Uul (4200 meters).  This snow-capped mountain is on the border of three western aimags: Khovd, Uvs, and Bayan-Olgiy.  Tonight, we will sleep at the foot of this grand mountain.  Here, our eagle hunter friend lives here with his family.  This spot at the base of the Tsambagarav is a main summer pasture and will be crowded with Kazakh and Uriankhai nomadic families for three months.  Overnight in a tent.

The city of Khovd was once a small farming community on the edge of the Buyant River and later became a center for trade with Russia.  Now, it is the major industrial center of Western Mongolia.  It was one of the last cities to be liberated from Chinese rule in 1912 by Mongolian commanders.

Starting our drive from the foot of the Tsambagarav Mountain, we’ll drive for six hours through Bayan-Olgiy’s rich red mountains to Khovd city.  Once in Khovd, we’ll drive you to the airport to be registered fro the flight to Ulaanbaatar.  The flight from Khovd to UB will take three hours and once in Ulaanbaatar, a guide will meet you and transport you to a hotel.  Dinner will be at the hotel restaurant.